The NBA lays claim to the title of most spectacular Basketball league, and the Olympic Games hold a special place in player’s hearts, but as a fan; EuroBasket is my favourite tournament in the sport, bar none. Why? Glad to explain, here are 5 reasons to watch (and enjoy) EuroBasket 2015:

The favourites vs the upstarts

France beat their bitter rivals Spain in the 2013 semi-Finals and Lithuania in the Final to win the nation’s first Eurobasket trophy. The semifinal was a great game in Madrid that went to overtime and denied Spain the chance to win their 3rd title in a row.

The defending champions are part of a small group of contenders expected to battle for the top 3 spots.  Greece have a strong team led by veteran guard Spanoulis bracketed by NBA players Koufos, Papanikolau, Calathes and Milwaukee Bucks Übertalent, Antetokounmpo. Serbia is on a roll coming off a silver medal at the 2014 World Cup of Basketball and although Spain just lost their opening game to the Serbs in Berlin, the addition of Chicago Bulls forward Nikola Mirotic to the spanish squad will pose mismatch problems for other teams.

Croatia, with former Euroleague Allstar (and current New Jersey Nets standout) Bogdanovic, made it to the final four of Eurobasket 2013 and always field a dangerous team; this year being no exception. Italy finally has a healthy NBA Quartet of Gallinari, Bellinelli, Bargnani and Datome to count on and Germany has the legendary Dirk Nowitzki back on the roster with Atlanta Hawks backup Point Guard Schröder to help carry the team.

Turkey, Slovenia and Lithuania (Silver medal at Eurobasket 2013) always have great teams at tournaments but can’t count on their best players this year.
In summary, the established Basketball powers are still vying for the title, but the next level of teams is more than capable of multiple upsets at Eurobasket.

Eurobasket 2015 was moved away from Ukraine (thanks Russia) and distributed amongst 4 cities in Croatia, Germany, France and Latvia, great for the home teams who will have massive crowd support in the group stages.
Yet one nation truly encapsulates the fan experience at Eurobasket: LITHUANIA
Lithuanian basketball fans are easily the best in Europe (sorry Serbia, Croatia and Spain) and maybe on the Planet. Knowledgeable, fanatic yet orderly, colourful, oh and L.O.U.D. I’ll let the pictures from last Eurobasket do the talking: 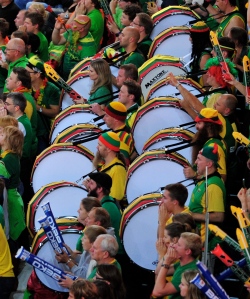 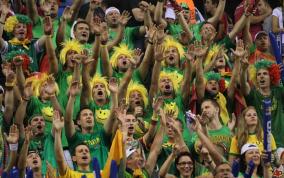 Here they are celebrating before an U19 World Championship game: FAN-Tas-Tic.

Group B: ‘the Group of death’

Put another way: Nowitzki, Schröder, Gasol, Mirotic, Ilyasova, Eden, Bellinelli, Gallinari, Bargnani, Bjelica, Teodosic all battling in the same group.
And those are just the NBA players or stars. These teams are packed with all-world level players. (sorry Island)

Tony Parker has scored the 2nd most points in Eurobasket history. Dirk Nowitzki: 3rd on the list, Pau Gasol is 8th. By the time the Group phase is over both the German and the Frenchman will have moved up to first and second respectively. Nowitzki has the 5th highest scoring average in the history of the tournament (22.3 ppg).

These 3 players are legends of the Sport. Accolades en masse, Titles in the NBA, easily the toughest league in the World (try playing 100+ games in 7 Months), and the respect and admiration of fans everywhere; true Ambassadors of the sport.

Eurobasket 2015 is probably going to be their last time participating in the European Championship tournament; savour it.

As a fan living and playing in Asia, S’pore TV transmitting the qualifying round all the way to the Finals two Years ago was nirvana. It was great to see the progress of the sport back in Europe.

Britain riding off a high from the 2012 London Olympics qualified for the tournament and just missed moving on from the Group round. Ukraine, coached by “The Czar” Mike Fratello and led by PG ‘Pooh’ Jeter surprised all of Europe by making it all the way to the quarter-finals. Serbia cruising into the quarter-finals, were trounced 60-90 by a Spanish team that barely made it to the knockout stage.
It. was. glorious.