Entourage Basketball Inc. was invited by Jammers league to participate in a pre-season friendly last weekend. It was a welcome opportunity to get some needed playing time amidst the ongoing haze saga in S’pore. The league still has not set a start date for Season 12, scheduling problems have been steadily increasing in scope the last few seasons, the friendly was a good compromise to get things rolling. 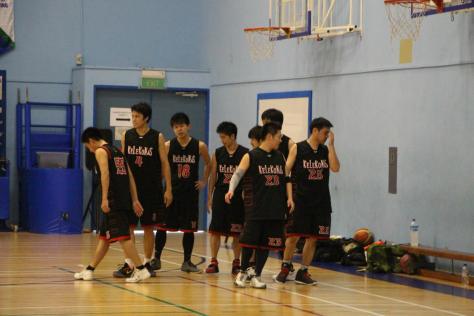 Though pysically imposing compared to their opponents, Entourage Bbball’s players showed heavy signs of rust, missing easy layups and turning the ball over multiple times.
Kelekonas moved the ball well, and made shots at their usual high percentage clip.

One bright spot for the the green & orange was the play of “T-Rex” Terrence who shot 3-4 from beyond the arc and had multiple successful drives to the basket. Other players on the team seemed sluggish and also had to contend with a very slippery floor at the Queensway SC venue.

T-Rex going hard to the hoop

The 12 point loss was a good indicator of the team’s current preseason form: a work in progress.