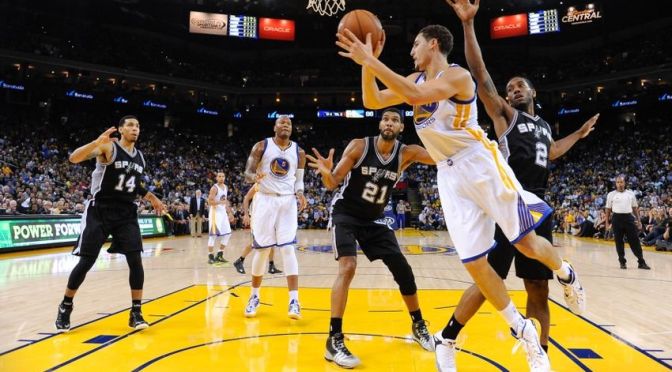 The National Basketball Association
The pinnacle of Basketball. Most heralded of all Basketball Leagues on Earth. Most watched, discussed, best salaries, most recognisable players, most games played (100+ for Finals participants), so what have the Stars of the NBA been up to since the dawn of the 2015/2016 season? Glad you asked, here are some opinions from an avid watcher.

THE main story: Golden State Warriors
24-0, that’s how last Year’s champions began the season. Twenty four wins, zero defeats. That’s just……
Historical streaks aside, the way they went about dismantling opponents, all with their Head Coach Steve Kerr sidelined due to multiple spinal surgeries, is just awe-inspiring.
Draymond Green has become one of the best players, never mind forwards, of the League, racking up 3 consecutive triple-doubles this week. They’ve overcome injuries to Barnes, Thompson and that PG of theirs (more on him in a sec) to keep piling on wins. Milwaukee and Dallas have been the only teams to stop the Warriors from being unbeaten in 35(!) straight wins, both losses coming with caveats (2OT win at Boston the night before facing the Bucks and playing without that PG in Dallas).

Pat Riley, if i recall correctly, once said the problem of trying to repeat as Champs in the NBA was the “disease of more.” Rotation players, expect more minutes, Stars believe the hype surrounding them even more, more expectations, more money, more, more.

The Warriors bench is happily waving towels as guys sink bog-standard shots, rookies and longtime injured players (McAdoo, Rush) get loud support from the Superstars, Bogut’s throwing and receiving alley-oop passes: one big lovefest by the bay. Assistant coach Luke Walton, just a Lakers player not too long ago, is even in the conversation for coach of the year? Wha?

Then there’s that PG: Stephen Curry.
Nothing i write can do this man’s on-court talents justice, let the Clip do the talking.

Kylo Ren couldn’t use the Force to stop this guy’s shot, that’s for sure.

Contenders and surprises
Without the Warriors and their chance at immortality; the Bulls all-time record of 72-10 is quite within reach, people watching the NBA might be singing the praises of Gregg Popovic’s San Antonio Spurs (30-6) instead. Adding Allstar LaMarcus Aldridge to an already potent starting five was the coup of last summer. Kawhi Leonard has turned into a two-way Terminator, harassing opposing Guards & Forwards and still leading the Spurs in scoring. US Sports most consistent winning franchise just keeps on chugging along, and not too many are noticing: as usual.

Behind them, Cleveland, Oklahoma City and the Clippers are among the contenders hoping to challenge GSW’s grip on the NBA title.
Currently Miami, Indiana, Dallas, Orlando and Boston are my choices for surprise teams of 2015/16: all teams with big changes in their roster (Mavericks, Pacers), Coaches (Orlando) or seemingly too young or old to keep up (Boston, Miami), according to season previews. Yet they just keep on winning.

Diminishing returns
Houston, Milwaukee, Portland and New Orleans all made the playoffs last season; not looking good for a repeat performance this Year. The Rockets, fired coach Kevin Mchale, squarely placing the blame to a disastrous season start at his feet, yet keep on meandering their Season away.
This was supposed to be Anthony Davis’ coronation season, the one where he would just take the reins of the Pelicans and lead them into contention territory; hasn’t happened. Milwaukee’s impressive length at all positions and the addition of PF Greg Monroe hasn’t worked out as well as they hoped and Portland lost 4 of last season’s starters.

Promising outlook: the gate crashers
Charlotte Hornets
Detroit Pistons
New York Knicks
Utah Jazz
Keep an eye on these teams, at least two of them are making the playoffs and shocking a higher ranked team this Spring

Favourite (under-reported) rivalry of the Season:
Robin Lopez vs NBA mascots
This has been going on since last Year, hilarious.

Pet peeve: Basketball Kicks, SO many to choose from
KD, Bron, Steph, Kobe, Harden: Sure, most fans would love to get their signature shoes. Legends, right?
Kyrie, Rose, CP3, Melo, Wall: hmm, might be a nice alternative to the überstar lines
Lillard, TP9: Umm, maybe. Both guys can be very spectacular on the court
Dwight, KG, Rondo, Parsons, Crawford and seemingly a dozen others: Come on!

The sneaker market is worth billions now, Shoe models pop up in 17 colourways AND can be customised online before buying (thanks, Nike ID), so there’s more available than ever. Remember the days of harassing friends going abroad to bring you back a pair of expensive Jordan’s? (i do) Those days are long gone.
Now all you need to decide on is which one of the dozens of models and hundreds of colours you want. Too much of a good (and often mediocre) thing? I think so.
Now get off my lawn!

Finally, to cap off this rambling review of the ongoing NBA season, please enjoy NBA.com’s very amusing quartet of “analysts”, collectively known as The Starters, breakdown of the first two months of the Season.