The midweek-squad were faced with an entirely different matchup in the second game of the FastBreak League last Wednesday.
Coming off a satisfying 71-68 win against the hulking frontcourt of the Iguanas, last week’s opponent, FastBreak Club’s Under-20 team, was in comparison a fast, tenacious well-coached unit. The fact that the boys were just coming back from Summer break mattered little as most of them had been sharpening their skills in bball camps allover the world, .

And boy were they ready to go, blanketing the E.B.I guards with a fullcourt press from tip-off on and keeping that defensive pressure on for most of the match.
Entourage-midweek countered with size , experience and the excellent scoring touch of newest combo-guard, Terrence T.

The Filipino guard, making his E.B.I. debut, displayed a smooth, unhurried game with a shooting touch unlike anyone else on the team. His PBA D-League experience was evident as he scored 25 points while sharing minutes at both guard spots with Andrew, and Terence G. His addition to the team underscores the increased optimism this season’s squad has.

All the scoring in the world won’t help much if you don’t stop the opponent from “getting theirs” though, and this is where the game was lost.  The game pace was hectic from the start, both teams were scoreless for the first three minutes  until FastBreak’s energetic big man, Nico, opened the proceedings with a drive to the rim. He was a problem in the first half, either slashing to the hoop while being fouled or shooting 3-6 from beyond the arc.

EntourageBBall had little trouble with the fullcourt pressure applied against them, Andrew and the other ballhandlers broke the press but the team’s offense bogged down a lot when the ball crossed halfcourt. Despite the presence of four (!) big men, Jean Baptiste, Thomas, Robert and Gerry, the frontcourt never got into the flow of the game.

The E.BI. guards and small forwards dominated ball possession thus making it easier for the younger opponents to focus their defense on stopping outside shooting. When the bigs did get the ball in the post though, they were immediately double-teamed….hard. One could even say, outside the stipulations of the rulebook. The referees, generally solid on this day, did make multiple questionable calls, some which tended to be overly focused on center JB who (was) fouled out for his second straight game.

All this aside, the entertaining game was always a close affair, with Fastbreak maintaining a high single-digit lead for the first three quarters. The men-in-green clawed their way back to a 6-point lead late in the final quarter, using their own hustling man-to-man defense to force turnovers and score in transition. Josh, coming off a disappointing game 1, anchored the defense with his effort, disrupting the FastBreak guard’s attempts at playmaking. Guards Ronnie and Terence, bigs Thomas and JB also dug their heels in, playing outstanding help D late in the contest.

The FastBreak team was quite unfazed however, moving the ball well in the half-court offense and repeatedly hitting 3-pointers to close the gap. They also showed a knack for crashing the offensive glass effectively all game long, these second-chance opportunities would eventually doom E.B.I-Midweek’s efforts to start the season 2-0.
After regaining a 1-point lead with 16 seconds to go, Josh was intentionally fouled to stop the clock. Stepping to the free-throw line with a chance to extend the lead by two points, but he missed both shots, setting up a last opportunity for the opponent’s to steal the game.

After stopping the initial drive with help rotation, E.B.I could not secure the defensive rebound. FastBreak’s guard Kevin, having a big game already, snuck into the paint, grabbed the offensive rebound and calmly dropped the ball in the net with 0.5 seconds left on the game clock. 77-76, FastBreak.
E.B.I set up a nice out-of-bounds play, got Terence the ball near halfcourt and he launched the ball…. grazing front rim, hell of a shot if it had dropped.

Post-game stats show that EntourageBBall shot 14-26 on Freethrows (FastBreak 9-18) one of the keys to the game. Securing the defensive glass, closing out on three-point shooters, opponent made six, and improved free-throw shooting will help the team secure wins going forward.

Josh at the stripe

Andrew rotating to the ball

Andrew at the line 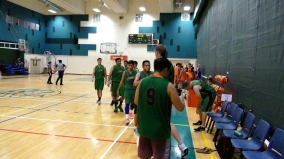 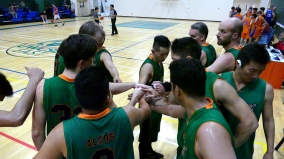 Close one, come back strong