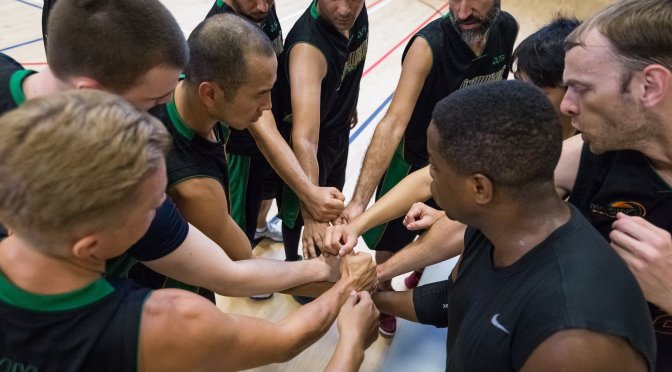 A dominant first quarter paved the way for the relatively easy win, pesky opponent notwithstanding. E.B.I’s inside-out game was on full display, Sebastien and JB dished out the punishment in the paint, overwhelming their defenders, leading to a procession to the free-throw line by both big men.

With an 11-man lineup to choose from, player-coach Dave was able to unleash some potent combos. One of the most effective was the 3-guard unit of Alejandro, Chi and Lester (or Terence) with Ronnie and Josh in the frontcourt:quick and unpredictable.

A third quarter ankle injury to center JB put a damper on any celebratory mood, even with the result a foregone conclusion by then.

To add insult to injury, literally, fiery point guard Chi was assessed a disqualifying foul late in the fourth quarter for “hitting an opponent”. A highly questionable call by the ref who was standing too far away from the situation.

During a pause in play, Chi was demonstrating a  motion to an opponent who earlier had elbowed him in the head during a screen. No contact was made and the involved opposing player even tried to explain this to the adamant referee, who stood his ground.

E.B.I. will be approaching the league office to have the punishment, a 1-game suspension, rescinded. League video should help clear up what the referee was unwilling to see happening in front him: a heated discussion without any intent to do harm.

E.B.I’s weekend league team currently on a three game winning streak now boasts a 4-1 record, good for second place in the league rankings. They trail unbeaten Proform Basketball who are on their own impressive 5-game streak.