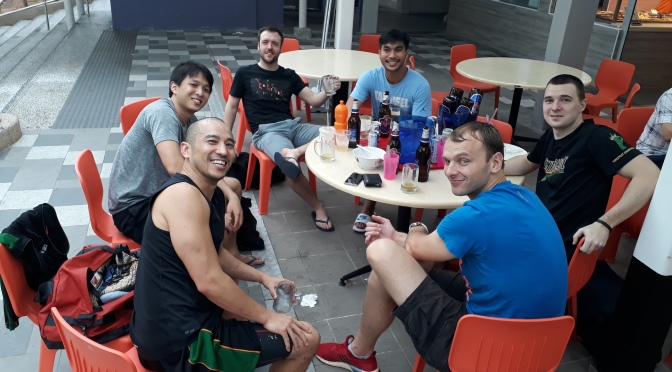 Riding a four-game winning streak into the Season five playoffs, E.B.I had reason to be cautious in outlook, having lost close regular season games to 2 of the semifinalists. The top four regular season teams. Lion City Basketball, Monstars, EntourageBBall and Proform, squared off in the semis.
Semifinal opponents Monstars had defeated Entouragebball in April, a badly executed 3-pt loss by the men-in-green. Team Monstars was also ramping up at the right time, with their own 4-game winning streak intact.

The game was a bloodbath as Monstars opened up a 20-point lead in the third quarter and cruised to the 89-57 win. The absence of a starting unit’s worth of players, Aitor, Jerel, Alejandro, JB and Javier were injured or abroad, could not be compensated. Turnovers and tepid defense sealed the defending champs’ fate.

It was the highest margin of defeat in the last two years, E.B.I. had not lost a Crossover League game by double-digits until the Monstars romped their way into the SE5 Finals series. EntourageBBall next faced Proform Basketball in the 3rd-place series, which was played in a best-of-3 format.

Due to the pervasive scheduling issues league management could not overcome, the season dragged from February to July with multiple by-weeks sprinkled in between and 3 different courts used, player availability for this matchup was abysmal. A six-man E.B.I. squad still showed impressive grit in winning the first game comfortably 62-51.

Proform rallied back with an emphatic win in game two, forcing the decider. Yet again a 7-man E.B.I. skeleton crew showed a lot of poise in game 3. Leading early in the game, the increasingly chippy game saw many lead changes and lots of chatt er. Proform players yapped incessantly at opponents and referees, but on-court, talk is cheap.
Huge defensive plays by Dave (2 blocked shots in crunchtime), Chi (vital steal with seconds to go) and Terence coupled with youngster Andre’s consistent scoring secured the close 58-53 win and the third place for the 3-time champions.
Finishing third after a three-peat was anticlimatic but given the unusually disjointed state of the season, constituted a solid end of the campaign for E.B.I’s weekend team.

Cementing it’s status as a transitional destination, multiple players are stated to leave the team and in some cases, Singapore, this Summer. Mainstays Mike and Alex along with 2017 additions, Manuel and Josh are gone for the Fall 2018 season.

With practice back on track and new players trying out or being added, this summer will be another challenge in maintaining team chemistry and a high level of basketball IQ.

Crossover League’s drop in organisational quality sadly continues, the league organisers have still not being able to secure a long term venue, which might push a possible sixth season start to December.
Entourage Basketball Inc’s weekend team is ready and team leaders Dave and Javier are working on solutions to keep the competitive spirits happy.

Midweek leagues are popping up across the country (FastBreak, Grandeurbc and a new one at the German school) but so far, Crossover had cornered the market on a high quality weekend league. Alternatives Jammer and BBaxn are non-starters for the E.B.I team due to bad experiences with both leagues in the not -too-distant past.

Seems it’s that time again, the Basketball landscape shifts regularly in Singapore, E.B.I will have to adapt to continue being among the best teams in the country.