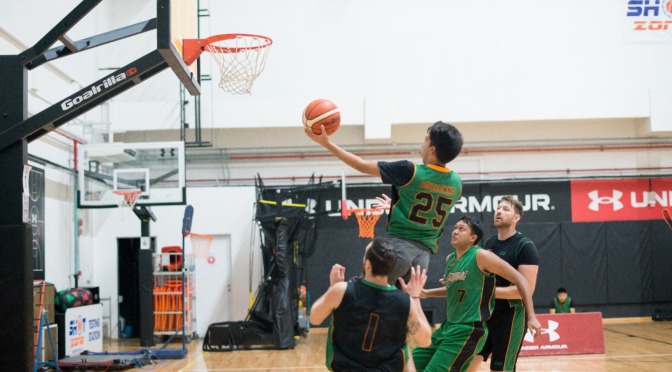 E.B.I Intraclub tournament ends in Style as the four teams converge on Shotzone’s impressive new facility to determine the Champion.

E.B.I had been fortunate enough to play the regular season of Spring Jam ’21 at ACS-Barker Road, a return to the old BBAXN stomping Grounds of 2008, but scheduling conflicts resulted in a scramble to find an alternate Court for the Final day of competition.

Enter Jerel Chavis. The 4-Year EntourageBBall Vet, whose Day job as Coach at Shotzone has proven beneficial to us at times, was able to block a Fullcourt at Singapore’s Premier Basketball Training Facility. A very lucky Break allowing us to conclude our Season. Another Bonus: air conditioning.

Prior to the 3rd Place Match, E.B.I Panthers, who throughout the regular season had been spared from the injury bug plaguing the three other teams, found out that neither Rob (C) nor Tim Ace (PG) would be available for the Game. Luckily the newest players to join the Club, Mohammed and Stanley as well as youngster Fareed (SG), stepped in to fill the void.

Their opponents and regular season leaders, Jaguars, had no such Problems. Led by Veteran Guard Tery, and former German ProA Player, Lukas (PF), the Jags got off to a flying Start and quickly built up a double-digit lead. The Quartet was so in tune, that Forward Micah and Shooting Guard Simone were seemingly scoring at will, while patiently executing their offense. The Wildcats secured third Place with a wire-to-wire 59-35 Victory.

And then there were two.
E.B.I. Sharks, losers of their first 4 regular Season Games, against the Cobras, a Squad that finished last in the Standings with a 2-4 record. Both lower Playoff Seeds truly proved that “it a’int how you start, it’s how you finish”.

With both teams at full strength, a wildly entertaining Game ensued. Sharks initially couldn’t miss from Downtown in the first Half, leading to a 13-Point Halftime lead.

The lead ballooned to 18 in the third Quarter and the Sharks seemed headed for an easy win. Chi’s Cobras though are the definition of “never say die”. Their last 2 regular season losses were by 3 Points.
Their semifinal win against the Jaguars: also by 3 Points.
When at full strength, the Cobras are a scrappy, well coached team.

So it came as no surprise when they turned up the defense, and stubbornly went on a 14-0 run in the fourth quarter to make what seemed like a Blowout win, become a hard fought last few minutes. Sharks turned the ball over repeatedly, leading to easy layups by James, Mcrid and Chi. Big man Hong Ming also did his part with timely cuts to the hoop for Paint points.

Ultimately though, the comeback effort fell short as the Sharks regained composure, and calmly resumed their torrid shooting to close out the Game. With the 55 – 50 win, Sharks became the inaugural Champions of E.B.I’s Spring Jam 2021.

Not a moment too soon either as just Days after the Final, CoVid Community cases began to rise in Singapore. SJ’21 might just have been the luckiest timed 4-on-4 Basketball Competition of the Pandemic.

A joy to organise, run and play in, SJ’21 just scratched that competitive itch perfectly. I am glad our loyal and reliable Players (including 7 new additions since October 2020) were able to play in a high level team Contest again after a Year away from any League participation.

Stay Safe, comply with the Government’s Covid Measures and Entourage Basketball Inc. will still be here, ready to adapt and play the Game we all love.